Everyone has probably suffered from first driving lesson nerves so we thought it'd be great to share our learner driver's thoughts with you, and how that first lesson went!

Evie Pearson, a sixth-former and driving newbie told us that as well as being really excited, she was also extremely nervous before her first driving lesson.

She told us that there were moments when she wanted to cancel her lesson because she was letting her nerves take over, but that:

"I know once I have had my first lesson, my initial nerves and fears will disappear!

What have you done to reduce your first driving lesson nerves?

"I put myself on a caffeine ban all day yesterday and today, and have instead just been drinking water.

"I've done this as caffeine makes nerves worse and because I do not want to end up in a post-caffeine slump during my lesson!

"I think it is really important to keep hydrated as I want to remember as much information from the lesson as I can.

"I have been eating well and as my lesson is this afternoon, I made sure to eat breakfast this morning. I think a banana will be a great pre-lesson snack as it releases energy slowly."

"I've got my provisional licence as it's important that you have both parts of your driving licence for your first lesson so that your instructor can make a note of the information on them.

"If you wear glasses it is a good idea to put them somewhere safe in advance.

Last night I also watched a couple of tutorials from the Car Theory & Hazard Perception Revision - DTS Anytime Online Training which has proven to be really helpful in helping me with driving manoeuvres. 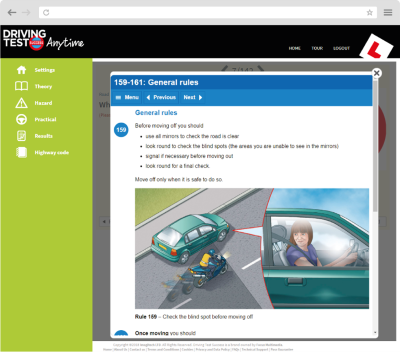 "I have spoken to a couple of my friends, some of whom have passed and some that are still learning, and they have all said that they were nervous for their first lesson so I think this is completely normal and something that everyone experiences.

"Something that I think most people worry about is their instructor. I have only seen great reviews about the instructor I have gone with however, it always crosses your mind that they may not be as nice as people have said. I keep thinking that it will be really awkward being in the car with someone I do not know, especially if there is no conversation but at the end of the day it is his job so hopefully this will not happen."

What are you more nervous about?

"I am nervous that I will not be able to get to grips with the controls of the car. The gear stick is something that I have never understood no matter how many people have tried to explain it to me.

"Whenever I am in the car with someone, I try and watch what they are doing with the gear stick and when they are doing it but I really don’t understand how people know when to use it and the whole “you have to listen to the car” talk really doesn’t explain things.

"I know that you go up a gear as you increase speed but other than that I am clueless.

"The pedals are also something that I have never given a second thought to before. However, as my lesson has been approaching, I have been watching what people have been doing with their feet and it all seems a bit confusing. As a short person, I have the inevitable worry of ‘what if I can’t reach the pedals or see out of the windscreen?’

"I’m pretty sure I will be able to but it is definitely something that has crossed my mind."

We caught up with Evie after her first lesson to see how it all went...

She said that "as soon as I got into the driver’s seat I was worried as I was looking through the top of the steering wheel. Little did I realise that the seat pumped up, oops!

Then my instructor asked if I knew about my pedals.

The first time I pushed the accelerator the rev count flew up to 80 which is apparently something that a lot of people do!

My instructor then told me about the safety checks that have to be done before you start driving so I followed them to make myself comfortable.

My instructor told me about the biting point of the clutch and demonstrated how this works using his dual controls.

This is basically when you lift the clutch up slowly and the front of the car bounces up a bit and means that you can release the handbrake and go.

Unfortunately, I may have released the clutch a bit fast resulting in a bit of a jerk forward of the car.

After another try, I was away and driving along the road. I actually couldn’t believe that I was driving a car!

When I was approaching a T-junction I was instructed to release my accelerator, put my clutch to the floor and gently and slowly brake. The gently and slowly part didn’t really happen as I wasn’t really sure how much pressure was needed on the brake.

Once the car was stationary I was told to keep my feet where they were and put the handbrake on.  At some points, I did find myself pushing the wrong pedals. I hope this is something that will come naturally after a while.

I also sometimes struggled to release the handbrake as I couldn’t push the button in.

What's your advice to anyone suffering first driving lesson nerves?

If you’re thinking about learning to drive but nerves are the reason you are holding off, definitely go for it.

It’s nowhere near as scary as I thought it would be!!

I really enjoyed my first lesson and as soon as I had finished I wanted to get back into the car and learn some more.