The UK Government’s new wildlife road sign, depicting a hedgehog, has been unveiled in a desperate attempt to improve the safety of not only people on the roads but also to protect our precious wildlife.

According to the latest Department for Transport figures, hundreds of people are injured every year in collisions involving animals, prompting the move to create a new wildlife road sign.

The Transport Secretary, Chris Grayling, approved the new wildlife road sign which intends to warn road users of the hazards that animals in the road ahead could cause. The new signs will be placed in areas where known wildlife accident rates are high. 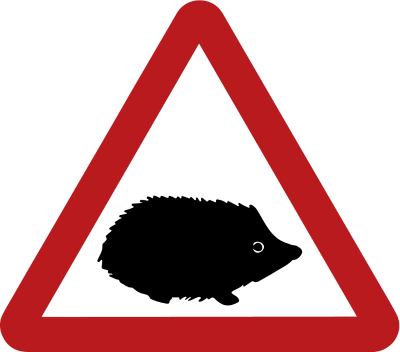 Grayling is also asking that local authorities and animal welfare groups identify accident and wildlife hotspots and advise where signs should be located.

Grayling said:
“We have some of the safest roads in the world but we are always looking at how we can make them safer. Motorcyclists and other vulnerable road users are particularly at risk.

“The new small mammal warning sign should help to reduce the number of people killed and injured, as well as helping our precious small wild mammal population to flourish.”

The decline in our wildlife is dramatic, with the hedgehog population being halved since 2000.

The People’s Trust for Endangered Species (PTES) have been working hard to understand how animals are affected by our roads, so launched their Mammals on Roads survey to get a clearer idea.

“We have also joined forces with the British Hedgehog Preservation Society to deliver the Hedgehog Street campaign, meeting with Mr Grayling to express our concerns for hedgehogs on roads and elsewhere.

“We welcome this focus on road safety and protection for all small mammals”.

Chris Grayling will be meeting with road safety experts including Brake, the AA, the RAC, and animal protection groups including the Wildlife Trust, to discuss the scale of the problem.

Wildlife road signs in the UK

The new small wildlife road sign complements other warning signs already used on UK roads, filling a gap between warnings about smaller animals such as migratory toads and wildfowl, and large animals such as deer and livestock.

“Powered two-wheelers provide a great solution to road congestion, but like all road users, riders must be aware of those around them.

“Therefore the MCIA is pleased to welcome these new signs that will help everyone, including those on 2 wheels or 4 legs, complete their journeys more safely”.It’s worth noting that the signs will only appear where there are large concentrations of small wild animals, including squirrels, badgers, otters and hedgehogs".

As this is a new wildlife road sign, it may appear as a question in the 2019 Theory Test, so it’s important to keep up-to-date with changes such as these. And, even though we wouldn’t consider this a particularly difficult sign to understand, it’s best to not get caught out!!

If you need more road sign revision, take a look at our ‘UK road signs - practice for the Theory Test’ blog page.

For more hands-on practise and revision, our Driving Theory Test 4 in 1 App has everything you’ll ever need to get a first-time pass. It even has an exclusive and addictive Road Signs Quiz!

At only £4.99, it’s available on iOS and Android, so download it today!

We are also offering a £25 Amazon Gift Voucher to the first person to send us a photo of the sign on one of our roads!

Remember to only take a photo if it's safe to do so and you're NOT driving!!