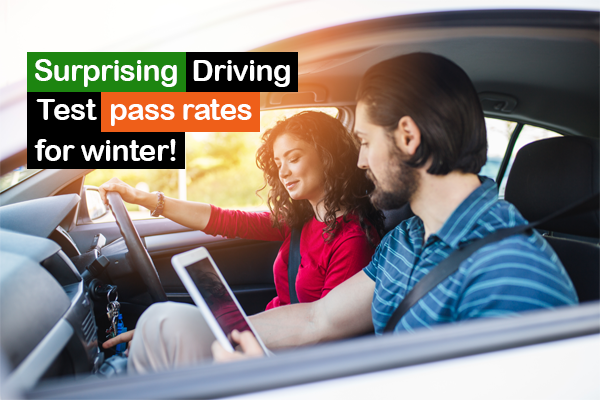 The latest data from the DVSA has shown that surprisingly, February is the month with the highest Driving Test pass rate.

Unsurprisingly, the worst months with the lowest pass rates are November and December, with just 46.6% of tests being successful.

February was an anomaly for the low percentage of success in winter, with an impressive 51.4% of learners passing their tests, closely followed by the spring months: April, March, May and July. The lower pass rates in November and December could have been down to a number of things; poorer visibility and road conditions such as ice, snow, sleet, wet leaves and mud. All of these factors are common in this season and will all impact test conditions.

The data also looked at the cities with the highest pass rate as well as the most common mistakes that resulted in failures.

The location with the highest pass rates was Scotland’s test centre Mallaig, which is in Scotland's highlands and had a whopping rate of 92.9%

Lee On The Solent in Hampshire was the busiest location for tests in the top 50 with a pass rate of 68%. Close behind was Yeovil with 65.9%, and Dorchester with 65.4%.

Top of the list for most common failures was poor observation and incorrect mirror use. Not having proper steering control and incorrect positioning when turning right at a junction followed closely behind.

The fifth most common fault was failing to move off safely.

These common mistakes can lead to accidents and vehicle damage, so it is incredibly important to only take your test if you are completely ready and confident you are capable of being completely responsible for the vehicle you are controlling.

The DVSA have an incredibly helpful checklist that you can work from in knowing when to take your Driving Test. See the checklist here.

If you feel confident in everything on the list, you are ready. If there are a few that you are still unsure of, then maybe now isn’t the best time for you: consider pushing your test back to a time that is more realistic for you and your skill set. This can be done at the latest three working days before your test. To move your test, click here.

Why not brush up on your practical driving skills by using the Practical Driving Lesson subscription in your 4 in 1 app? That's right, the app isn't only for your Theory Test, it's also there to help prepare for your practical test too. With over 260 revision videos, full mock tests and the top 10 reasons why people fail, you can ace this test too. Start your free trial today by clicking here!

Moving your test date shouldn’t be seen as a negative! If anything, it is an incredibly mature thing to do and you will be so thankful for not wasting your time and money by rushing things.